Two types of assets are gaining ground in global finance, enjoying the current momentum of sustainable assets: the Green Bonds and the Social Impact Bonds.

Sir Ronald Cohen, a prominent investor known for being one of the first developers of venture capital, often says in his recent lectures that the nineteenth century saw the measurement of financial returns on investments, the twentieth century saw risk and return measurement, and that the twenty first century will witness the measurement of risk, return and impact. Green Bonds and Social Impact Bonds provide investors with the potential to keep up with these three variables and have been generating profitability as well as positive impacts.

Green Bonds are Fixed Income securities whose main characteristic is raising capital to invest in projects that promote environmental sustainability. In this sense, they can even be issued by a company in the oil or pulp and paper sector, depending on where the resources will be applied. According to the Climate Bonds Initiative, a London-based think tank of the sector, in September 2016 the total amount of labeled green bonds were USD 140 bn, while there would be USD 576 billion in unlabeled green bonds. Below is the think tank’s estimate of Green Bonds issued since 2012 and its distribution around the world: 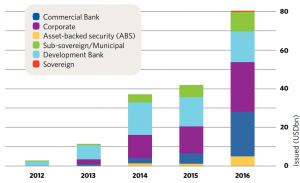 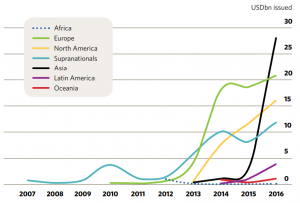 The advantages of Green Bonds for issuers are many: they potentially reach more investors; have high demand in the domestic and international markets; and improve reputation in the financial market and with society in general.

It is very important to prove that the fixed-income bond to be issued is in fact “green”, in addition to the need for further follow-up. Recently, a relevant group of international banks created the Green Bond Principles, which lists a series of optional norms for the bond classification, such as transparency as to where resources will be applied, eligibility criteria and monitoring the environmental performance of the investments made. The green bond classification may also follow the criteria established by the Climate Bonds Initiative, with specificities for each sector. The company can classify its emission as “green” or seek an independent opinion, obtained through a certification, validation, consulting or environmental rating.

Good examples of Brazilian companies were Fibria’s issuance of USD 700 million and BNDES’s US$ 1 billion for wind and solar projects, both in 2017. According to the Climate Bonds Initiative, the potential for green bonds issuances in Brazil is huge and by the middle of 2016, the outstanding value of green bonds was USD 2.9 billion, both labeled and unlabeled.

Social Impact Bonds (SIBs) are a structured operation. Basically, a social project is financed by private initiative and, if it achieves the expected social results, the local government compensates investors for the results achieved. It is a more modest type of investment than Green Bonds. According to British NGO Social Finance UK, since the first issue of SIB in 2010, until 2016, there were 60 issuances in total, totaling just over USD 200 million. In Brazil, they have been called “contracts of social impact”.

Such assets may be interesting since they allow innovations in social programs that would become very complex if tried directly by local governments. For example, the first Social Bond issued sought the recovery of newly released British prisoners, so they would not return to jail, since the rate of recidivism at the location was very high. The government would pay private investors if the rate of recidivism did fall.

Despite the issuances small size, since the focus is on social projects, the positive impact achieved may be very relevant and it is estimated that more than 90,000 people have been affected to date. In Brazil, Social Bonds were not issued yet, but gradually the issuance of Green and Social Bonds have been moving from the developed world to the developing world.

A new trend in these markets has been the use of philanthropic resources to provide liquidity or reduce risk in these instruments. This can enable the entry of new investors and help foster growth in these markets.

Green and Social Bonds bring as an innovation the measurement and transparency of the environmental and social impacts of its applications and gain notoriety for doing so while delivering an attractive financial return. In this sense, they can be an opportunity for investor families interested in generating positive environmental and social impact, with transparency of results and financial return

Graduated in Economics at PUC-Rio and certified as Chartered Financial Analyst (CFA). After years of working in the financial market, he is now manager of the Financial Planning team at Stone Pagamentos.

Partner at INEO and co-author of The Investor Family and the Family Office.

We're not around right now. But you can send us an email and we'll get back to you, asap. 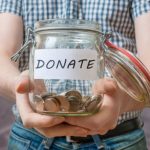